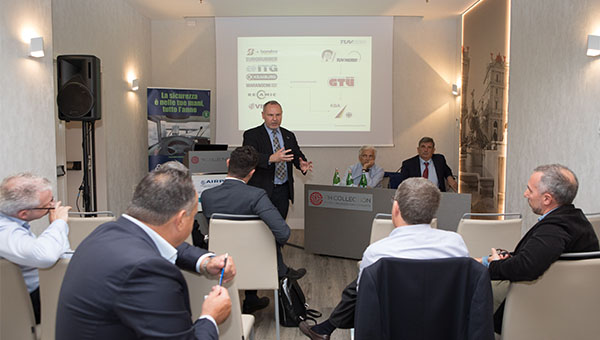 Waiting for the announced anti-dumping duties to be confirmed, several aspects are making the future of the retreading industry interesting, starting from circular economy, soon to become a new production paradigm. During the annual meeting between AIRP members, which saw the participation of Bipaver (Europe’s Retread Industry’s Trade Association), these and many other issues of particular interest for the association were discussed.

Carlo Ferro
For the first time in years, the annual conference of Italian tire retreaders focused on the concrete opportunities the future has in store: on the one hand the confirmation of anti-dumping duties on Chinese truck tires temporarily introduced last May by the European Commission; on the other, following the approval of the new European circular economy directives which, in a not too distant future, should prompt the Union’s member states to adopt measures in favour of virtuous practices from an environmental point of view, leaving retreaders and associations alike with the responsibility of exploiting these opportunities to the full. This was the message that Stefano Carloni, AIRP president, directed to the association’s members during the 56th general assembly, held in Rome on the 5th and 6th October.

A chance not to be missed
“For the first time, after many years, we arrived at this annual event on the strength of a rather important albeit still provisional result: since the 4th May, the duties introduced by the European Commission on truck tires imported from the People’s Republic of China are in force” Carloni stated at the beginning of the meeting, referring to the long and detailed work carried out by the Commission with the collaboration of the associations and AIRP itself, which should reach its completion by October, if the anti-dumping measures are confirmed. However, besides the bureaucratic and institutional incidents involved, and going way beyond the interests of the retreading sector, another aspect deserves to be highlighted according to Carloni, since the Asian superpower is currently implementing a trillion dollar plan aimed at strengthening its infrastructural connections with Europe taking control of several container terminals and establishing new railway routes: “This means that the current trade deficit, which is already favouring China, is destined to become even larger,” he said. Furthermore, he added “and so far, few have been placing the right emphasis on this issue, the challenge is not simply between economic powers, but rather between a free market concept and a superpower whose methods of expansion have been laid bare by recent investigations. Therefore, import duties are necessary to allow our companies to resist the competitive pressure created by unfair state aids, a necessary bulwark to defend our way of doing business in a market that wants to remain free.”

In this context, Carloni continued, duties placed on disposable or non-retreadable tires are also an indispensable tool to allow the transition to a circular economy, in which retreading stands out as the perfect example. Not surprisingly, last May, AIRP decided to join the Foundation for Sustainable Development: “We felt this was an important step to explore these new production models which we will necessarily have to embrace, and we expect numerous and important ideas and information from such an exchange of views and ideas”, explained the president. Circular economy means first and foremost saving raw materials and energy, and this is perfectly summarized in a key concept, eco-design, i.e. designing goods and products made to last as long as possible being “repairable”, “regenerable”, “reclaimable” and “recyclable”. This new economic paradigm, however, constitutes an important challenge for the tire industry since, as things stand, there is no certification to establish from the start which tires are retreadable and which are not. Thus, according to Carloni, this will be the crucial element for the next few years if the tire industry wishes to work towards obtaining tax reward schemes for promoting sustainable production models. For AIRP, though, other issues are still on the table such as ELT collection, largely due to irregular imports which would be appropriately dealt with through an innovative traceability system able to follow the tire throughout its useful life, as well as the truck tire market, which has been greatly impoverished even in strict technical terms, to the point that retreaders are increasingly faced with customers who are unaware of the potential of tire retreading in terms of cost per kilometre. Nevertheless, looking beyond the current issues facing the industry, the general framework, as far as retreading is concerned, and with the help of the various initiatives already highlighted, is starting to look rather interesting, as Carloni concludes: “the opportunities that can stem from a circular economy are truly limitless;  bringing back your business, after years of lying on the edge of the industrial scenario, at the very centre of the tire management system in the circular economy era will depend on you, on your desire to prove your worth, on your ability to interpret the changes”.

So much to do at institutional level
As far as the future of the sector is concerned, as underlined by President Carloni, much will depend on the activities carried out by each association. At this point Guido Gambassi, AIRP secretary, took the stand and produced a brief summary of all the activities that have affected the association in the last twelve months and the main issues plaguing the sector,  through a report on all current institutional activities, starting from the rather complex European Commission’s anti-dumping investigations, supported by the association with the necessary information, and the invaluable help of the European retreaders association, Bipaver. A lengthy and painstaking activity that started in June 2017, and was summarized during the assembly by recounting the most important moments, such as the mandatory registration of all imported truck tires from China dated February 02, and the introduction of provisional duties on May 04. Soon after, the inevitable outcries and appeals received from the Chinese industry opened a rather articulated phase of negotiations, with proposals to change the tariffs in an attempt to reduce the excise duties, which were immediately retorted by European associations clearly in favour of higher charges, until a final proposal was issued, which included anti-subsidy excise duties, albeit slightly lower than those currently in force, on September 28, the outcome of which was still unknown at the time of the association’s meeting.

Among the various topics under discussion, the “Circular Economy” package, approved last May by the European Council, came under the spotlight: here we are looking at four directives updating the main EU waste regulations with more stringent rules and goals, to be implemented by all member states within two years. Italy too, therefore, will have to comply with these new regulations by May 2020 and update its legislation accordingly: an opportunity not to be missed if retreaders wish to assert and enhance the virtuous role of their sector.

Next up, Hon. Laura Agea, head of the European Parliament’s Commitee on Employment and Social Affairs, representing the institutions at the annual AIRP assembly, spoke about the importance of this challenge. “A circular economy is the goal towards which we must all strive, and thanks to the foresight that is so common among entrepreneurs, especially in Italy, you have been able to read and understand well in advance the changes that , willing or not, will affect our economies,” said Agea. “There is no talk of a downsizing here, but rather of growth based on clear and recognizable indicators, sustainable and inclusive, which aims to harmonize the use of resources, which has so far been uncontrolled. Either we decide in favour of this paradigm shift, or we will deplete all the planet’s resources in a relatively short time”, continued the MEP, who went on to talk about the importance of a defensive system against some of the most aggressive and unregulated economies: “we are now experiencing the effects of globalization because we have failed to harmonize the rules that would have allowed all world economies to compete on equal ground, that is why we are still talking about excise duties and anti-dumping measures. Now, more than ever, there is a need to put a barrier to what is happening, in order to curtail its uncontrollable effects”.

New technical regulations on the horizon
The last part of the meeting was dedicated to an in-depth analysis on European regulations with a special focus on retreads. In order to provide a comprehensive picture to all in attendance, AIRP invited Michael Schwämmlein, Bipaver’s technical advisor, who is responsible of following all the regulatory activities being carried out at European level; his report centred around the new labelling proposal, and 3PMSF marking. As far as labelling is concerned, an update of the European Commission Regulation 1222/2009, which should also include new labelling criteria for retreaded truck tires, is still under development; a significant technical obstacle, in this regard, relates to rolling resistance values; in fact, while “wetgrip” performance and noise levels depend largely on the tread pattern, rolling resistance relies greatly on the casing, and is therefore difficult to evaluate separately. In addition, Bipaver is also proposing a voluntary labelling system for car retreads, which would allow retreaders to access tenders for large fleets, which often require very specific labelling data. Winter markings, on the other hand, are primarily linked to the German legislation, therefore, starting from January 1, 2018 tires will be considered suitable for winter use only if bearing the 3PMSF marking, hence Italian retreaders who sell their products in Germany will have to adapt their products to that effect, following the indications found in the updated R109 regulation. Schwämmlein went on to analyze the different approval systems currently used for truck retreads whether pre-cure cold retread or hot retreads, and under license from new tire manufacturers; in this case, car tires lack the necessary regulatory support, such as an extension to regulation 108. Renato Rittel, who works as a private consultant in this sector, offered a further contribution on 3PMSF tires, and illustrated some possible solutions to contain the costs normally linked to current approval methods.

AIRP’s CORPORATE OFFICERS CONFIRMED
The second day’s proceedings was devoted to voting for the renewal of corporate offices, which takes place every two years. The results confirmed the composition of the association’s board of directors, which includes the following companies: BR Pneumatici, Carloni Pneumatici, Carloni srl, La Genovese Gomme, La Lombarda, Malatesta Sud, Marangoni, Pe.Sa Gomme, Rigomma, Rinovis, Tessilgomma, Veneto Gomme. The first meeting of the Council will provide the opportunity to appoint the president, vice president and treasurer.

BIPAVER makes retreading visible and sustainable as a fundamental part of the circular tyre economy. We provide practical support and guidelines for to comply with current and upcoming (technical and administrative) challenges.

BIPAVER - Bureau International Permanent des Associations de Vendeurs et Rechapeurs de Pneumatiques
We are using Google Analytics to gather Information on the usage of our website. Given your consent this results in the processing of personal Information and the usage of cookies. More Information on this issue can be found in our privacy policy.
I do not agree I agree
Privacy & Cookies Policy

Any cookies that may not be particularly necessary for the website to function and is used specifically to collect user personal data via analytics, ads, other embedded contents are termed as non-necessary cookies.