On May 30, the members of BIPAVER met in Cologne for the annual General Assembly. The 25 attendants represented almost all association, supplier and associated members. After a warm welcome from the president, Patrick Sjölin, an update on various regulatory developments which affect the European retread industry was given by Michael Schwämmlein, technical consultant. Such as provisional anti-dumping measures, labelling of retreaded tyres, 3PMSF-marking regulation and the implementation of ECE R106 (agricultural tyres). 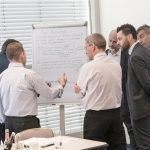 Then some market developments were discussed, followed by a discussion on the association’s strategy. In four subgroups, the participants shared their thoughts on membership, key activities, funding and external developments. The outcomes will be used by the board of BIPAVER to develop and propose a strategy for the future. All members agreed that, regardless of the outcomes of the current regulatory developments, there will be enough to do for BIPAVER to secure the future of independent retreading!

Finally, Jukka Lankolainen (Finland) was appointed as the new president, and Tim Hercock (UK) the new vice-president of BIPAVER. The meeting was concluded with a delicious lunch, offered by BRV.

The next General Assembly is planned at the AUTOPROMOTEC 2019, by invitation of AIRP.

BIPAVER - Bureau International Permanent des Associations de Vendeurs et Rechapeurs de Pneumatiques
We are using Google Analytics to gather Information on the usage of our website. Given your consent this results in the processing of personal Information and the usage of cookies. More Information on this issue can be found in our privacy policy.
I do not agree I agree
Privacy & Cookies Policy

This website uses cookies to improve your experience while you navigate through the website. Out of these cookies, the cookies that are categorized as necessary are stored on your browser as they are essential for the working of basic functionalities of the website. We also use third-party cookies that help us analyze and understand how you use this website. These cookies will be stored in your browser only with your consent. You also have the option to opt-out of these cookies. But opting out of some of these cookies may have an effect on your browsing experience.
Necessary Always Enabled
Necessary cookies are absolutely essential for the website to function properly. This category only includes cookies that ensures basic functionalities and security features of the website. These cookies do not store any personal information.
Non-necessary
Any cookies that may not be particularly necessary for the website to function and is used specifically to collect user personal data via analytics, ads, other embedded contents are termed as non-necessary cookies.
SAVE & ACCEPT